HomeIn the run up to July 25th

The New York ABC some years ago made an international call out for an International Day of Solidarity with me – Jock Palfreeman, Antifa currently held captive by the Bulgarian state.

Although I do not want people to forget that I continue to stay incarcerated for defending a Roma man being brutally beaten by 15 neo-nazis, this July 25th 2017 I request that as many people as possible can organize solidarity funds for our prisoners’ union here, the Bulgarian Prisoners’ Association (BPRA).

Mostly our funds are spent on hiring legal representation for prisoners to defend them if they have been attacked or if their rights have been violated in some way. We also use funds for buying and distributing law books, legal mail, maintaining the website http://bpra.info and phone calls.

Often I am asked “what our target is?” and we don’t have a target to raise, as we always need funds as the violations against prisoners in Bulgarian prisons apparently will be endless as too will be the fight for reforms. No contribution will be too small and with the help from sympathetic lawyers we are getting solidarity rates so with as little as 50€ we can get a prisoner quality representation in court to appeal or challenge a violation of rights.

Please share the facebook page of the Association. It is used as a way of quickly disseminating information about real time events within Bulgarian prisons, for example the mass strike of workers in the paper bag factory on the 10/05/2015. It will also be important to make quick alerts when guards torture or beat prisoners, especially now that the Director Peter Ivanov Krestev (Началник Петър Иванов Кръстев) and his henchman Guard Mitko Ivailov Spasov (Надзирател Митко Ивайлов Спасов) have returned to Sofia Prison we expect a continuation of the mass violations of human rights as it was when they were dismissed from Sofia Prison in early 2015. The more the public knows and are able to respond the harder it will be for the prison administration to cover up their crimes against us.

Apart from fund raising I would also like to ask for a letter writing campaign to the Vice-Minister has refused to meet with our union representatives and implied that we are not a legitimate organisation, for us to prove that we have the support of prisoners we could organize a mass protest and even though we would make our point, we would be punished. Alternatively I request that supporters write letters to the Vice-Minister of Justice urging him to meet with and work with our outside representative of the Bulgarian Prisoners’ Association, Head Secretary Valentin Ivanov. Of course the prison staffs’ association has access to the Ministry of Justice and so it is our demand that the Ministry meets with our Association as it did with the association of the people who violate our rights on a daily basis.

Please write requesting that the Vice-Minister of Justice meets with our representative Valio Ivanov at address:

For fund raising and donations we have both a bank account and PayPal, please message the facebook page of the Association for specific details 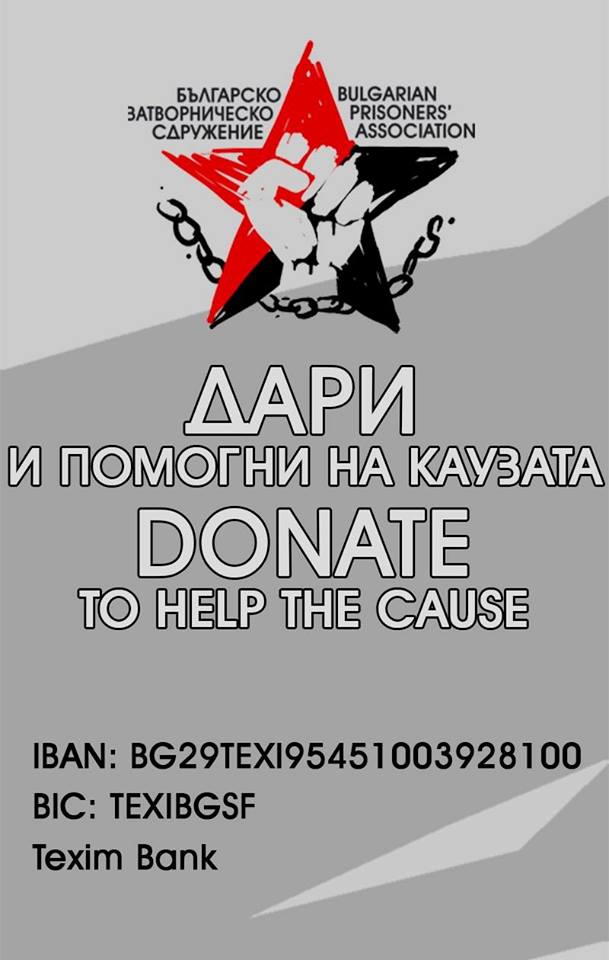