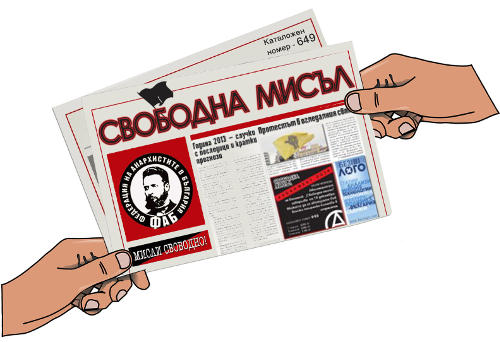 The text (available only in Bulgarian) released by the FAB (Federation of the Anarchists in Bulgaria) on the webpage of their newspaper ‘Svobodna Misal’ (‘Free Thought’) written by Hristo Nikolov has some valid points. However the question arises ‘what the hell would FAB know about prisons in Bulgaria?’

Instead of the FAB showing solidarity towards prisoners and in this case with myself, the FAB has lead a campaign of lies against me for many years. The actions of the FAB are not only contradictory to their claimed goals and all principles of anything remotely socialist. But when they joined the nationalistic hysteria they became just another apparatus of state oppression themselves.

Not only have the FAB been almost totally ineffective and inactive, their biggest accomplishments have been homophobic, racist and nationalist diatribe. To this day, the FAB and any other Left people or organisations that ally themselves with the right wing are the single biggest threat to the Left. It is not the nationalists, nazis or right wing who threaten the Left because they are simply doing what is natural to them. It is the divisive actions of those who should know better than to spill their sexist, homophobic, racist and nationalist complexes into the Left political sphere. Furthermore when the Left join in with nationalistic hysteria there is no longer any distinction between the Left and Right and so if the Left espouses the same views as the Right they offer no alternative.

This includes attacks on any minority, including the prisoner class. The FAB never contacted me or made any attempts to research the events that lead up to my arrest. Furthermore like the cowards they are, they published lies about me without giving me the right to reply or defend myself. In this manner they capitalised on the state’s oppression. It is also of significant importance that I couldn’t defend myself being a foreigner not knowing anyone and not being able to speak the language. So here we have a so called “anarchist” federation that utilizes social disadvantages and state oppression to further attack the already victimized.

The question is still unresolved ‘what the hell would the FAB know about prisons?’ Have any of the FAB done a single thing in solidarity with prisoners in Bulgaria? Have any of them even been prisoners themselves? For more than a police check of 24 hours? If none of the FAB have ever been prisoners before have they been working in solidarity with prisoners? Has the FAB made contact with activist prisoners and attempted to understand what is happening or how to help? The overwhelming majority of prisoners in Bulgaria are Roma, maybe 70 to 80%, are there even any Roma in the FAB? The answer to all these questions is a resounding ‘no’.

It is clear that no one in the FAB have ever been in prison or currently incarcerated when they copy generic propaganda from others who have also never been in prison. The FAB says “The ideas to better the conditions in prisons lead to nothing”. And this statement makes sense if you are neither trying to improve the conditions in prison or if you are not actually in prison yourself. In this regard we find the FAB guilty of the gravest of bourgeois sins, that of trying to tell minorities what is good for them whilst having absolutely no idea of their problems or the solutions for them. It is natural to want to diminish the affects of activism to improve prison conditions if you yourself take no part in any actions to improve the plight of prisoners.

The FAB said “the purpose of those facilities is not to be vacation places, but to punish with worse conditions compared to ‘outside’” this is absolutely false. It is clearly written in the Recommended Rules for Prisons that “prison life should be arranged so as to approximate as CLOSELY as possible to the realities of life in the community” actually the perpetuated myth that prisons must be places of lesser conditions then those outside is one of the ways the state convinces the public that it is normal for prisons to be of poor conditions. So now we have an FAB who both perpetuates the myth the state wants everyone to believe (including prisoners) so that they don’t have to take responsibility for poor conditions and we have a FAB who not only does nothing to change the situation but even claims that “making the conditions in bulgarian prisons better leads to nothing”. Are there any more perfectly pacified citizens then those who espouse the views that prisons are supposed to have bad conditions and there is no use in doing anything about them?

Of course the prisoner doesn’t believe these things at all. Deep inside those of us who resist have a fire of freedom burning bright inside us that fights off the darkness that is prison. We know that we are people, equal to any outsider and as such our division from society behind walls of cement and razor wire should only be one of officialdom. We should only be officially separated from society, otherwise we should be practically completely incorporated into society, because in fact we ARE society. Small improvements have significant impacts on the world around us for both ourselves and all other prisoners who might not be inclined to demand “bettering the conditions”. It is a bourgeois hypocrisy that the FAB neither do anything to end prisons or end our imprisonment and then tell us and everyone else that not only must we stay in prison, as they will not help us escape, but also there is no use in improving our conditions, in effect telling us that we must endure the same conditions without any progress.

Then the author confuses even himself and he says “Finally, those who go out after serving the sentence are basically two types: sophisticated in the craft or so frightened that they become “exemplary citizens”, that is, they are absolutely submissive and do not like to raise their voice or act against obvious gaits of power.” But already the FAB told us that “to raise their voices or to take actions against the wrongdoings of the ruling powers” is useless, they already said “making the conditions in bulgarian prisons better leads to nothing”. So the FAB would have us believe that there is no reason to “raise their voice” and at the same time tell us that this is exactly what the state wants from us. Again the author shows that their defeatist attitude against reforms and progress is actually what the state wants.

The FAB are effectively arguing that when a thirsty person comes to you and asks for water, the FAB start telling the person that water will not help as the system is such that the thirst will come again and then of course the FAB refuse to give water to the thirsty as they have for so many years refused to show even a gram of solidarity or help our cause.

The author said “in which psychopaths don’t grow and in which the physiological problems that lead to aggressiveness are seen on time”. The problem with this text is that it perpetuates the myth that the typical prisoner is in prison for something violent or aggressive. The majority of prisoners are in prison for non-violent crimes. The idea that prisoners are raging masses of violent psychopaths is just another stereotype that the state and tabloid media (julta presa) loves to use to scare people away from treating us like normal people.

The idea that the only solution is to destroy prisons leads us to the next thought ‘But we are not enough or strong enough to destroy prisons’. So if Hristo’s only proposal is unobtainable then effectively he is proposing that not only can we do nothing but that we shouldn’t. The prisoner who fights for their rights and dignity knows all too well that you do whatever you can, whenever you can, wherever you can and with whomever you can to obtain some relief from the oppression of the prison system and this is exactly why prisoners are revolutionized in prison as they learn the meaning of solidarity, where prejudices are broken down in the face of overwhelming oppression.

No freedom loving prisoner would ever dream of being so paralysed by nihilism to think that only an unobtainable goal is worth fighting for (and then in fact resign oneself to not fight for it at all as it is unobtainable). As our options are limited we choose all the options that we have. Be it a fight to stop guards from torturing prisoners or for a piece of fruit with lunch, nothing is too small or insignificant to the prisoner. That is why our battle is 360° and why one of the unofficial slogans of the BPRA is ‘Behind Enemy Lines’. Another reason for the slogan is that we are totally surrounded by hostiles with no course of retreat to a home-front, and thanks to the reactionary propaganda of people on the Left like the FAB, prisoners in Bulgaria continue to be extremely ostracised. This is why we needed and formed the BPRA, because no one in Bulgaria ever cared about the people behind the walls. The collective mindset in Bulgaria is that prisons should be feared and that agitation is useless. We are a growing element in the Bulgarian prisons, a growing element that refuses pessimistic surrender. For many of us inside, we are indeed freer then those from the FAB who espouse empty copy and paste dogma.

It is self-explanatory when the text on the FAB webpage speaks very little about prisons or prisoners in Bulgaria. The text only contains 83 words specifically about a problem in Bulgarian prisons, and that is about the lack of access to work, but then the rest of the text talks about prison in general and in the abstract. The text almost has as much information on prisons in America with 76 words. Why doesn’t the FAB want to speak openly about the real issues affecting prisoners and what the solutions can be to reduce the unneeded suffering of prisons? The truth is…. They don’t care about us. Which is fine, they join the ranks of the rest of the drone citizens who also don’t care. But please FAB…. Don’t pretend that you care or that you have anything in common with Anarchism or Anarcho comrades or our battle with the state as prisoners.

As a fish lives in water, prison is the natural habitat for Anarchists, this is why all true Anarchists work to improve the fortunes of prisoners and why the FAB have never done so. Shame to all the Bulgarian Left who have left their comrades and fellow workers to fight for themselves in prison for so long! Wake up! The front line is the gate of the prison! The battle has begun without you. You’re welcome to join us, otherwise don’t tell us what is good for us.